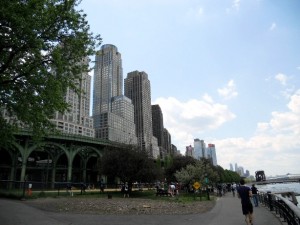 The Riverside South project was notably developed byDonald Trump and his partners.  Not an easy project that took some time to actually happen as it was a

complicated and massive development deal.  The area was originally a freight rail yard owned by New York Central Railroad. Also complicated the development was the West Side Highway, which had to be buried for a certain amount of road.

After decades and many different configurations the project finally came to some fruition as a number of hi-rise condominium buildings were built under the Trump Place name and the Riverside Boulevard address was born. Riverside Blvd is home to the Trump Place buildings and now a number of Extell development buildings including The Rushmore and the new condominium the Aldyn.  There is still southern expansion of the area that is going to be the home of more condominium building’s along with planned parks, school, retail and community involvement.

If you are interested in purchasing, renting, selling or investing in any of the condominium buildings on Riverside Blvd contact us today at (646)644-6929 or Email https://chinesespeakingagent.com/contact/