Manhattan New York neighborhood Chinatown and Little Italy are two of NYC popular ethnic neighborhoods. When you walk through the streets underneath the fire escapes of turn-of-the-century tenements, you are awakened by the sights, sounds, and smells of the Italian and Chinese cuisines and cultures emerging from restaurants and shops. 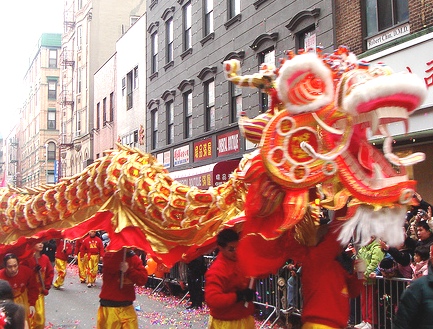 Chinatown neighborhood boarder on Canal Street with many storefronts putting their merchandise onto the sidewalk and you can count on everything from “designer” handbags to electronics. New York city Chinatown is one of the largest Chinese communities outside Asia. It is not unusual to enter a street where all signs are in Chinese and where the stores are run without any English-speaking representatives. You’ll find the majority of dining choices along the narrow, winding Mott and Mulberry Streets just below Canal Street.

One of the most well known street-fair is the San Gennaro festival and in February the Chinese New Year is celebrated with dragon dances, parades and other traditional ceremonies, and thousands of tourists, residents and visitors join in the festivities. Apartment prices vary from block to block, from some of the cheapest in the city to higher-priced dwellings drawing residents who love the desirable downtown location.

Come visit New York and walk through the streets of Chinatown and Little Italy.