The Vanderbilt Condominium at 235 East 40th Street is one of the most well established and highly desired full service condominium buildings in the Midtown East neighborhood.  Located on 40th Street between 2nd and 3rd, within a very short distance to both Grand Central Station and the United Nations.  The Vanderbilt Condominium is one of the most conveniently located condominium buildings with close proximity to the midtown business district but also a number of neighborhood establishments. 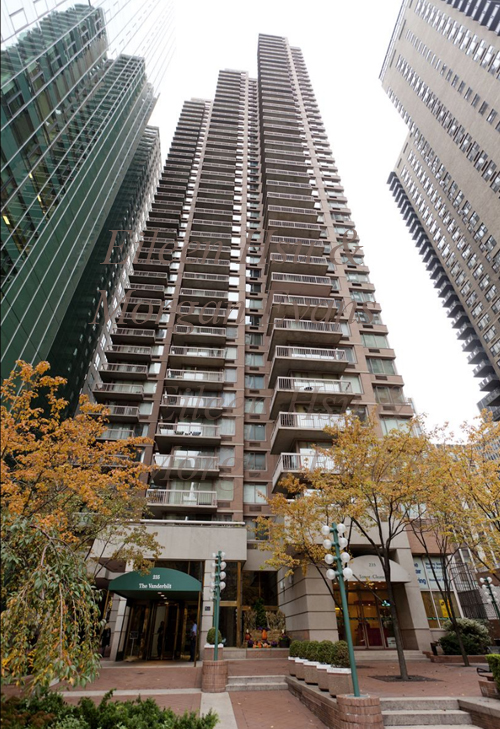 Built in 1986, the Vanderbilt Condominium at 235 East 40th Street is a tall building at 41 floors with over 365 residential condominiums.  This full time doorman and concierge building has an amenity package that rivals any other Midtown East condominium building in the neighborhood.  Called the Vanderbilt Club, the lower level of the building has a 75 foot long pool, sauna, jacuzzi, fitness club, basketball/racquetball court, both mens/womens locker rooms, table tennis and all attended by building staff.

The Vanderbilt Condominium is a full service building, with 24 hour hour attended lobby with doorman and concierge, attended package room and live-in super.  There is a full size laundry room and garage that can be accessed from within the building.

The Vanderbilt Condominium is one of the most desirable condo buildings in the Murray Hill neighborhood for a number of reasons.  The location near both Grand Central Station and the United Nations makes this highly valuable for the owners in the building  Located at 235 E 40th Street, this is one of the premiere Grand Central Station Condo buildings.

And because of the desirability of the Vanderbilt Condominium there is always a healthy number of sales occurring every year.  As the end of 2011 is right around the corner here is a market report of what has sold in the building this past year and what is available.

Currently for sale on the market there are Four(4) One Bedroom Apartments asking a range of $675,000-829,000.  The size of most of the apartments and different degrees of renovation along with lower to higher floors accounts for the fluctuation in pricing.  The higher floor One Bedroom apartments for sale at 235 East 40th St, typically have 1.5 bathrooms also increasing their value.

There are a number of apartments in contract right now that will probably close in the next couple of months.

So far in 2011 there have been approximately 13 closed sales.  There is a possibility that there were more sales than that between individual owner’s or properties that never came on the sales market, but we will get a good evaluation of pricing for 2011.

For such a big building as the Vanderbilt Condominium, having 12-15 apartments sell in 2011 is a healthy number.  That only makes up about 4% of the total inventory.  All in all that is fairly low.

Something to consider is how long each apartment stays on the market, typically once it is priced within a fair market range it will sell very quickly.

For a comprehensive and up to date list of the condos for sale at 235 East 40th St contact us today.  We have sold a number of apartments at The Vanderbilt Condominium so far in 2011 and can help you finding an apartment for sale in the building or helping you sell it.  Call us at (917) 837-8869 if you would like to speak with us.

Vanderbilt Condos at 235 East 40th Street is one of the most desired Grand Central Station condos buildings. Whether you are looking to invest, rent, or live Vanderbilt Condos could be the location for you. 中文服务,专售纽约曼哈顿康斗 (646)644-6929.